The Chairman of the L. & N. W. Railway Co., Sir Richard Moon, expressed his desire to have a Printing Works at Wolverton to employ the daughters of the men working in the Railway Works. Mr George McCorquodale readily agreed to this and opened a branch in 1878 with approximately 20 employees, the land being purchased from the Radcliffe Trustees.

The work carried out when the factory first opened was the manufacture of Official Registered Envelopes for the G.P.O., and for many years a Government Excise Officer checked the number of envelopes stamped. The first building consisted of one floor, running north to south, and was in use until 1897 with a six horse power gas engine in the north end providing the power. The Office, which was in part of the building, was used in later years as a paper warehouse, and the Engine House was the first dining room for the male employees. The first three-floor building was erected in 1884. About this time general envelope making was commenced on the ground floor, and a little later General Printing, Ruling and Binding was added. By 1886, there were 120 females and 20 males employed.

In 1889, a further three-floor building was added, part of it running parallel with the Stratford Road, the ground floor being used for a printing department. A 12 horse power Crossley Gas Engine was then installed to augment the one previously referred to. Even then it was a frequent experience for one or both of these engines to fail, leaving the plant at a standstill. Some cottages were also erected for the employees, and a house built and occupied by the then manager, Mr. John Appleton. 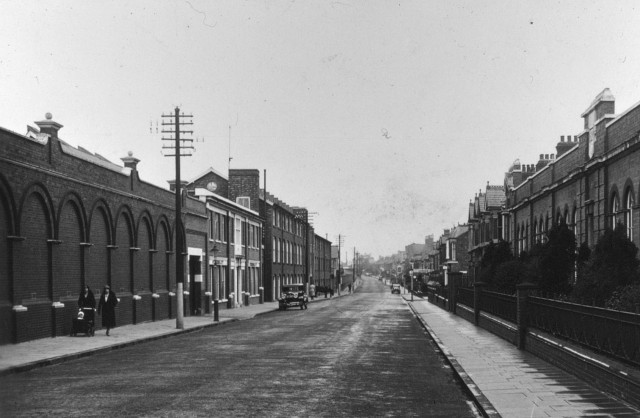 About 1890 a dining room was built between the two three-floor buildings and was formally open by the late Mr. George McCorquodale, the founder of the Company, this being his last visit to these Works. The development of the works proceeded rapidly. In 1894, another three-floor building was erected, the ground floor now being used as a Paper Warehouse, the first floor the Miscellaneous Dept., and the top floor the Folding and Sewing Section. In 1897 the cottages were pulled down and yet another three-floor building was erected by Henry Martin & Son of Northampton, the ground floor being used as the Large Machine Printing Dept., the first floor the Ruling Dept., and the top floor as the Binding Dept. In 1899, a one storey building was erected by T. P. Robinson & Sons and used as the Composing Dept., later occupied by the Warehouse and Engineers` Dept. A private Fire Brigade was formed in 1904.

In 1905, the Envelope Works, a building 300 feet long by 100 feet wide, was built, and a large proportion of the Works was reorganised and re-arranged. In conjunction with the building of the Envelope Works, a Power House was erected and two 85 horse power suction gas engines with dynamos were installed for the generation of current for power and lighting of the factory. All the other gas engines were scrapped and in 1911 it was necessary to increase the power units with the addition of a 300 horse power suction gas engine with necessary generators and dynamos. These continued in use until 1924 when replaced by the Northampton Electric Light & Power Co. The old Power House was then used as a Waste Paper Dept. and Carpenter`s Shop.

In 1910 a Government contract for postal stamped Stationery was secured and another ground floor building erected on the south-west end of the Envelope Works. This was known as the Inland Revenue Works. A Government staff of about 12 or 15 people was appointed to supervise the creation and checking of the production of this stamped stationery. Soon after this four acres of land were acquired on the south side of the Stratford Road, and another building erected in 1912, and extended in 1914. After Armistice a large army hut was purchased for use as dining, reading and recreation rooms. Towards the end of 1920 and early 1921, a new case room and stereo dept. was erected behind the three-floor building erected in 1897.

In 1926 another floor was built over the warehouse to accommodate the offices. In the same year the automatic Sprinkler Fire Protection system was installed throughout the Works and the Fire Brigade disbanded. During 1935 -1936 the yard on the north side of the General Works was built over, making a small machine printing room, 386 feet long by 29ft wide. The total frontage of the various buildings on the north side of Stratford Road was 986 feet, and the whole factory approximately 4 ¾ acres. A further 2 ½ acres of land was let as allotments to the Bucks C.C. 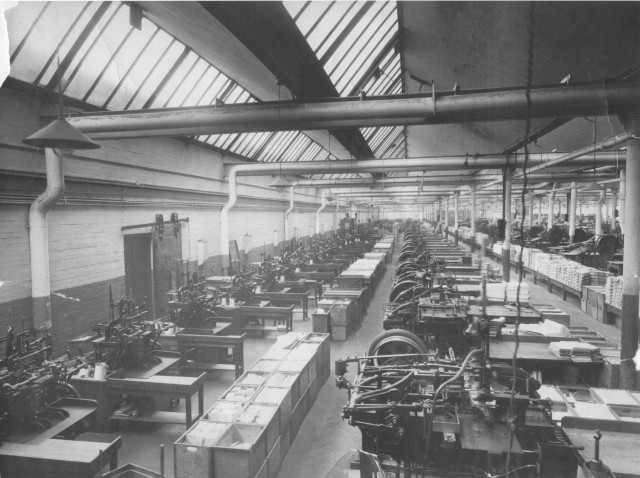 Records of 1937 -39 indicate that the total number of employees was nearly 800 and 11 of the men had over 40 year’s service. In the early years the majority of the 700 to 900 girls working at McCorquodale were between the ages of 13 and 21, the school leaving age in 1914 being raised from 12 to 14. One former employee, Mabel Archer, explained at that time “You were not allowed to work at McCorquodale when you were married. When you married you left, and if you had worked there for ten years you received a grant of £10”. In the early 1890`s, to encourage female employees to remain in the factory as long as possible, the Directors, it would appear, decided to give a wedding grant on their wedding day of £10 to those who had completed 10 years service; £15 for 15 years, and £20 to those who completed 20 years service.

From the time the factory started until 1909 the working hours were from 6 am to 5.30 pm and 6am to 12 noon Saturdays, with ¾ -hour break for breakfast and 1-hour for lunch, making a total of 54 hours per week. In 1909 this was changed to a 50-hour week, subsequently reduced to a 48-hour week by national agreement, and by 1935 wages had risen from 4/6d to 10 shillings per week. By 1959 this was reduced to a 42-hour week. McCorquodale not only provided shorter working hours but contributory pension funds, the marriage bonus, paid holidays, a mutual sick society, as well as providing a dining room. Early records claim that holidays consisted of Bank Holidays, without pay, and apprentices were allowed an additional half-day on “Pancake Day”, also without pay. It was customary for the firm to subsidize an outing once a year, usually to the seaside. The outing cost employees 9d each which included the train fair and access to the pier. Normally the hired train would leave at 4am and meet many delays on the way. There is no mention whether this was held on a Sunday or an unpaid  day in the week.

In 1912 the Good Samaritan Society was started, and continued as a voluntary movement until 1926, when about 50% of the employees were members. This movement was then reorganised and all employees voluntarily agreed to a deduction from their wages of 1 ½d. per week for juniors and 2d. per week for seniors, with the Company occasionally giving substantial donations to help this worthy cause. The directors gave permission for the Reading Room to be used for dances, whist drives, etc., in aid of this fund, and the cash benefits given to the employees were then considered to be amongst the best in country.

At the outbreak of World War 1 McCorquodale suffered the loss of senior male staff through enlistment and the women workers were not only under pressure to work harder, but had the increased responsibilities of running a home and suffer increases in the cost of living. The government then organised war bonuses to be paid to workers to help compensate. The actual amount paid varied depending on the area and the type of work. It also depended on employees working a full week, for if one day was missed the bonus was not paid. However, in many cases women were being paid half the war bonus that men received, causing discontent. By 1915 Wolverton had a well established cooperative movement, a Labour Party branch, and a branch of the Women`s Cooperative. In 1909 there were reports of suffragette activity in the area.

On June 5th 1915 the Wolverton Express described the following:-

“The work girls and men at Messrs. McCorquodale`s Works were locked out on Thursday 20th May, in consequence of a demand for a war bonus which it was alleged had been given to some men. Some 800 to 900 workers have been affected. Negotiations between employers and employees failed to bring about a satisfactory settlement to both sides and on Wednesday morning when the works were re-opened only about 50 workers entered the factory”.

The Wolverton Express also reported women marching through Wolverton with “red ribbons flowing from their coats and hats”, with other reports of bands playing and a garden party. The strike lasted for more than two weeks. Five Hundred of the women workers joined the Paper Workers Union and their demand for both a war bonus, and recognition of the Union, involved pickets, parades, collections and meetings. The women eventually succeeded in securing a 7.5% increase in their weekly earnings as “war wages”. 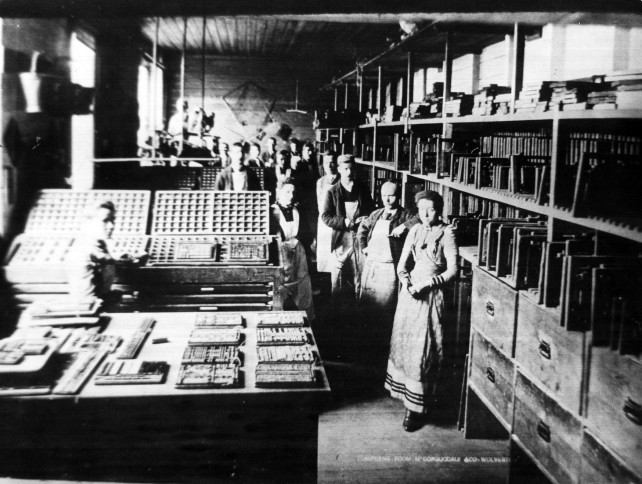 An article in the Bucks Standard, November 5th 1938 edition, mentioned that employees of McCorquodale embarked on a “mission of mercy” to raise at least £500, following an appeal by Lord Hesketh to help meet the £100,000 extensions and improvements to Northampton General Hospital. Employees spent months in preparation, with every encouragement from the General Manger, Mr H.E. Meacham, and the firm`s directors. A grand floral bazaar was staged in the works Reading Room with the stalls representing the four seasons of the year. The opening ceremony was attended by Mr Hugh McCorquodale, son of the Work`s founder, and his charming wife {known in literary circles as Barbara Cartland}. The stalls were judged by Mrs de.Chair of Bradwell House with prizes presented of £1, for  the Small Machine Dept., 15/-, the Binding Dept., and 7/6d, the Reading Room. Mrs McCorquodale was presented with a model motor car, with electric lighting, and a model garage for her 12 month old son Ian. A gift of an invalid bed-table made in the works was presented to Lord Hesketh for the hospital. A final total of £660 was raised.

The buildings on the north side of the Stratford road were demolished in 1988 and later replaced with car salesrooms. The buildings on the south side of the Stratford Road were purchased by Bong {UK} Ltd and they submitted an application in December 2005 to replace the existing buildings with a mixed use development of 134 dwellings {including 16 flats for the elderly}, 6 workshops and 4 commercial properties.  A report from an archaeologist at that time suggested that this may be a site of a Roman or Anglo-Saxon cemetery. However, the new residential streets were completed in 2010, centered on the new McCorquodale Road, retaining the front wall of the McCorquodale building facing the Stratford Road.

Aside | This entry was posted in Living Archive. Bookmark the permalink.